Renowned nationally and beyond for his herbal medicines and pharmacist achievements, Mr Lardner recently became ill and was taken to Wimmera Base Hospital’s Emergency Department where he was diagnosed with suspected encephalitis.

The hospital’s Director of General Medicine Dr Chris Ebersohn, who diagnosed Mr Lardner, arranged for an MRI scan to confirm his call. Mr Lardner could not get the scan in Horsham because he has a pacemaker that could potentially interfere with the device.

He was transferred to Ballarat Base Hospital where they had a suitable MRI and was treated there before returning to Wimmera Base Hospital’s Intensive Care Unit and eventually the Wyuna rehabilitation unit.

Mrs Lardner said her husband made a full recovery under Grampians Health’s team and she and Des were very grateful.

“As someone who was very concerned about the Grampians Health merger, I can say we have been very impressed with the level of care,” Mrs Lardner said. “The Emergency staff at Horsham were very responsive when Des presented there and Dr Ebersohn was quick to diagnose the problem.

“We’ve utilised the service from Horsham to Ballarat and back again and we couldn’t fault the service.”

Eight months ago, Des was at Wimmera Base Hospital with heart issues which is when the pacemaker was fitted - and the service was faultless then as well.

“For someone who is normally so healthy and fit, it has been such a shock but the care right through has been excellent. Des is 100 percent back to his best.”

The Lardners wanted to show their gratitude for the care received and decided the best way was to reward with a cup of coffee or tea for each of the staff members in ED, ICU and Wyuna.

“We thought it was the best way to make sure every individual involved could get a small reward of thanks.” 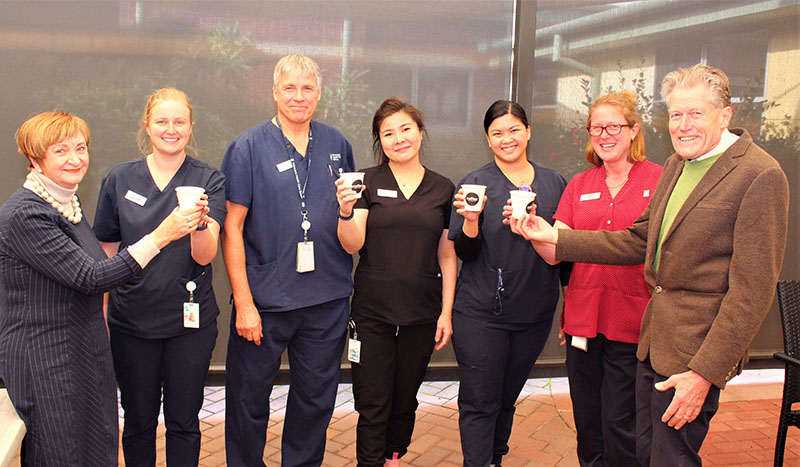